A few weeks ago I mentioned to Mr. Duffy that I was looking at light boxes online and thought that perhaps, being the handy sort of gentleman that he is, he could build me one. After a few questions about specifics such as what exactly I would use if for he got to work and I soon had a custom light box of my very own.

The Writing surface is tempered glass. Underneath the glass is the white translucent plastic that covers ceiling light. The one bit of help I was able to give him was to hold the edge of the plastic as he ran it through the electric saw. Notice the brass handle on the side. That's functional. 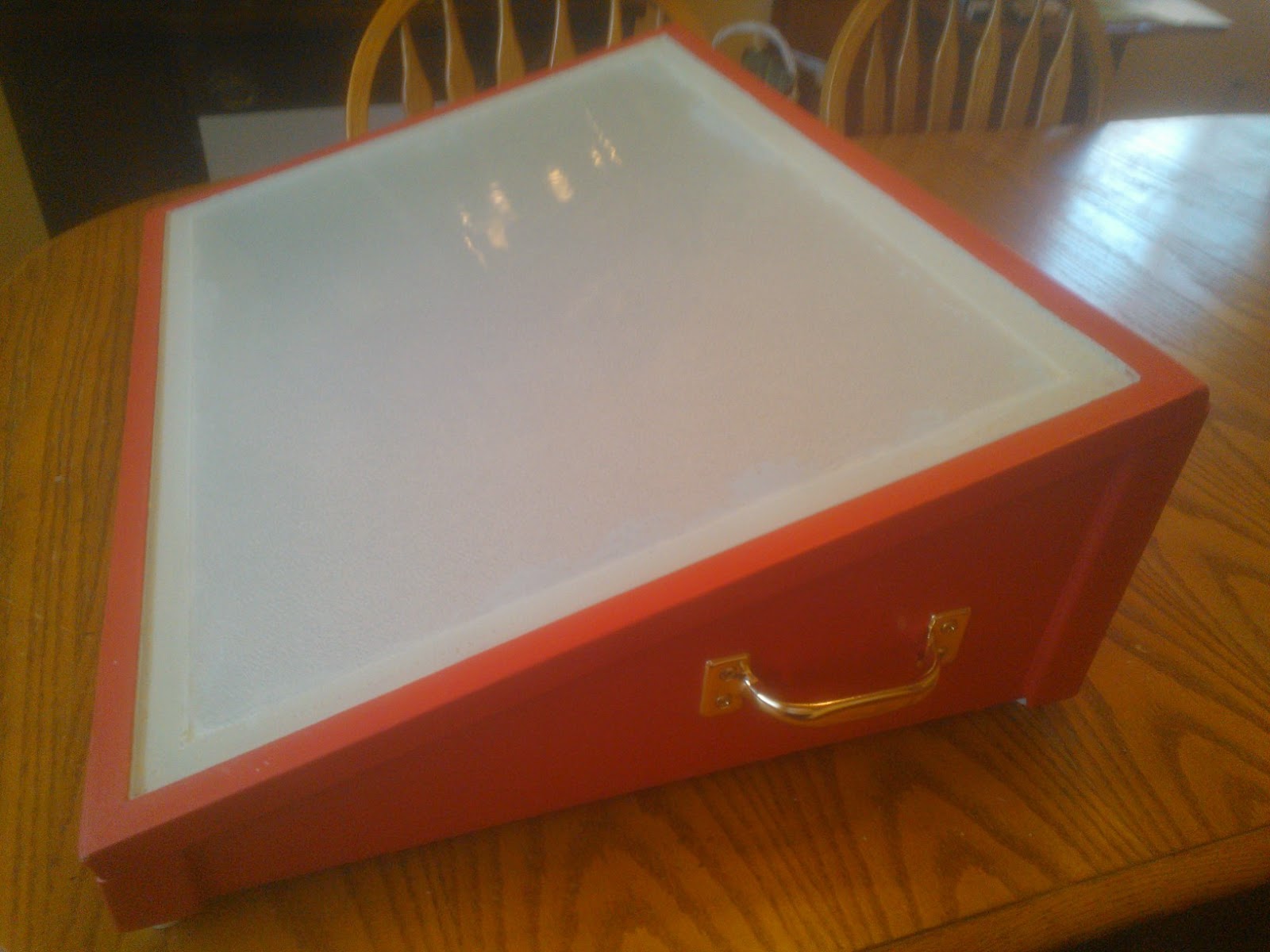 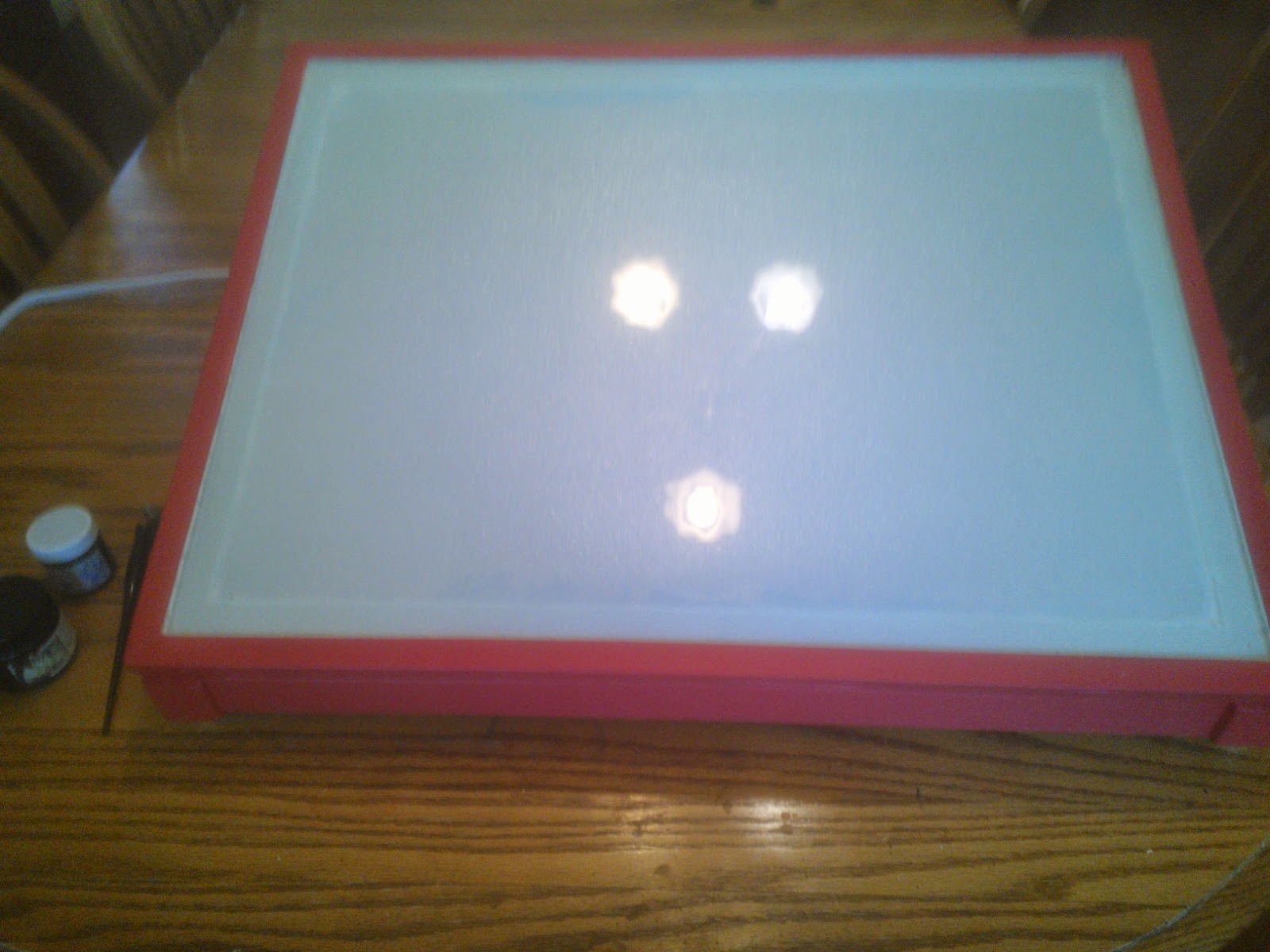 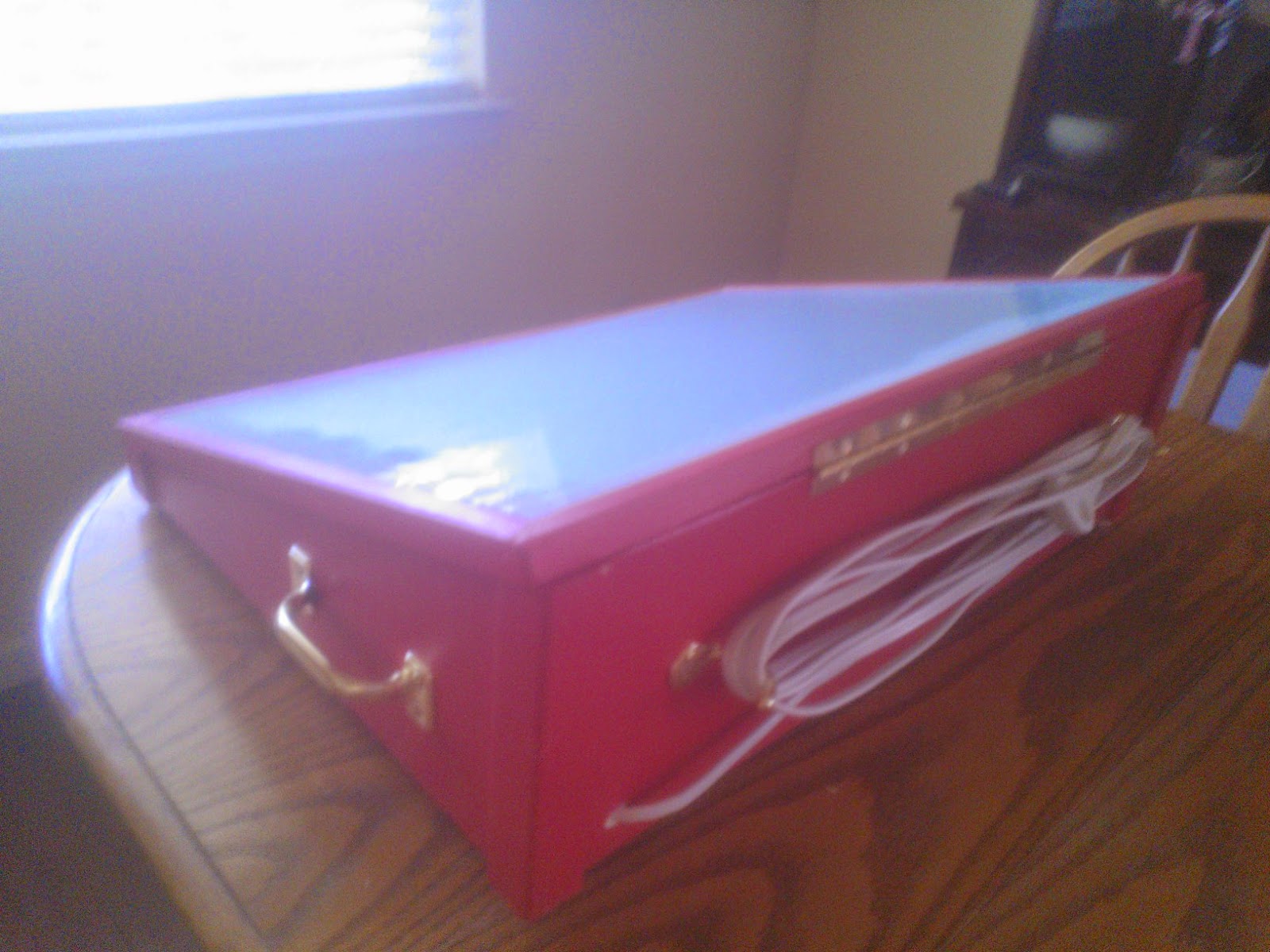 Inside he used an LED ceiling light fixture. It's bright and never gets hot. There's also a switch. If I want lights along the sides he will add those later. The light is pretty well distributed so I don't think I'll need those. It's nice to know he'll go the extra mile if I want extra features later on. 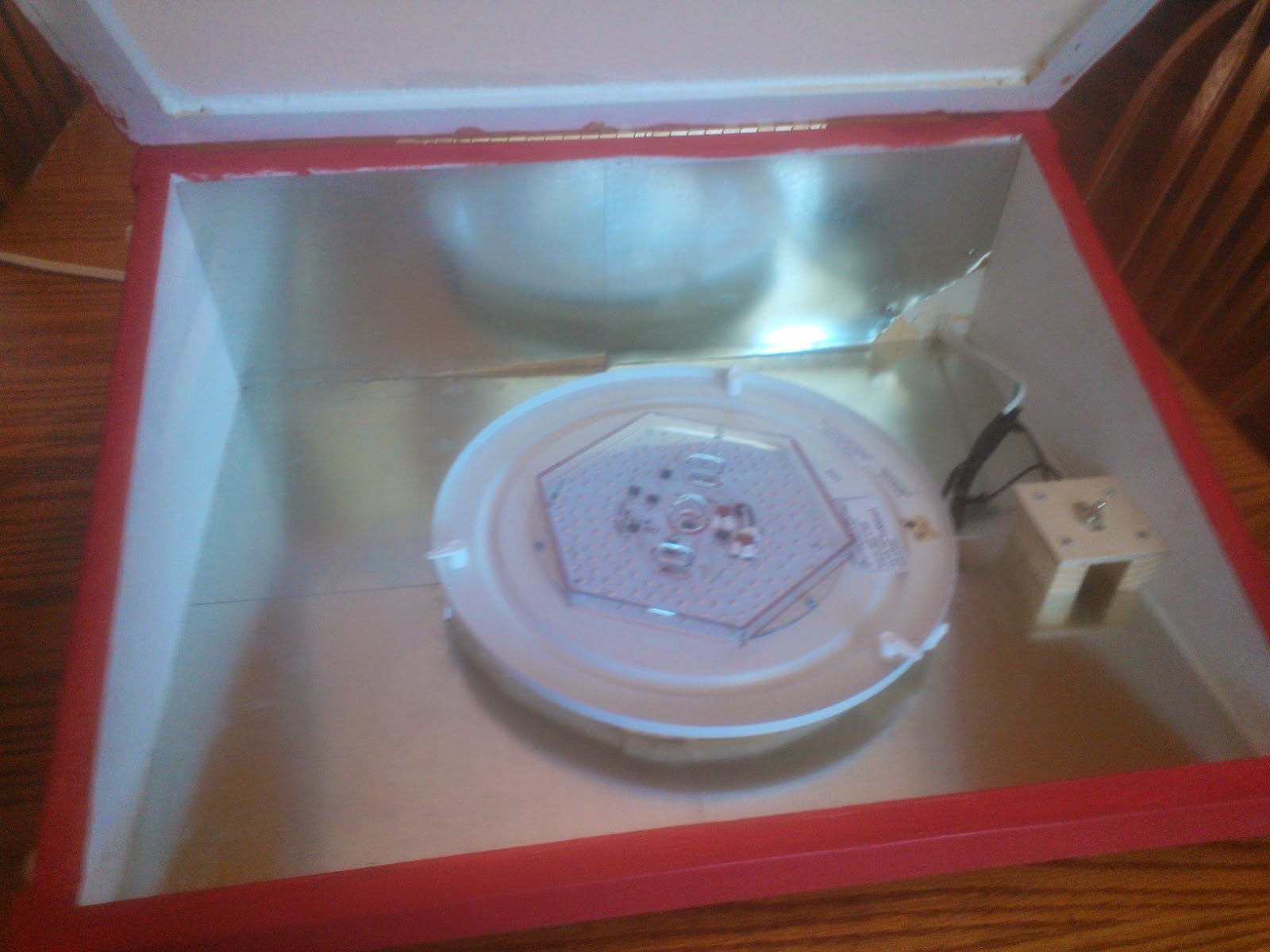 Because I don't have an arts and crafts room Mr. Duffy gave consideration to portability and storability (to invent a word). On the side opposite the handle are little feet to stand it on. They protect both the floor and the box when it's stored in the corner or the closet. The bottom of the box has the same feature to protect the table top. 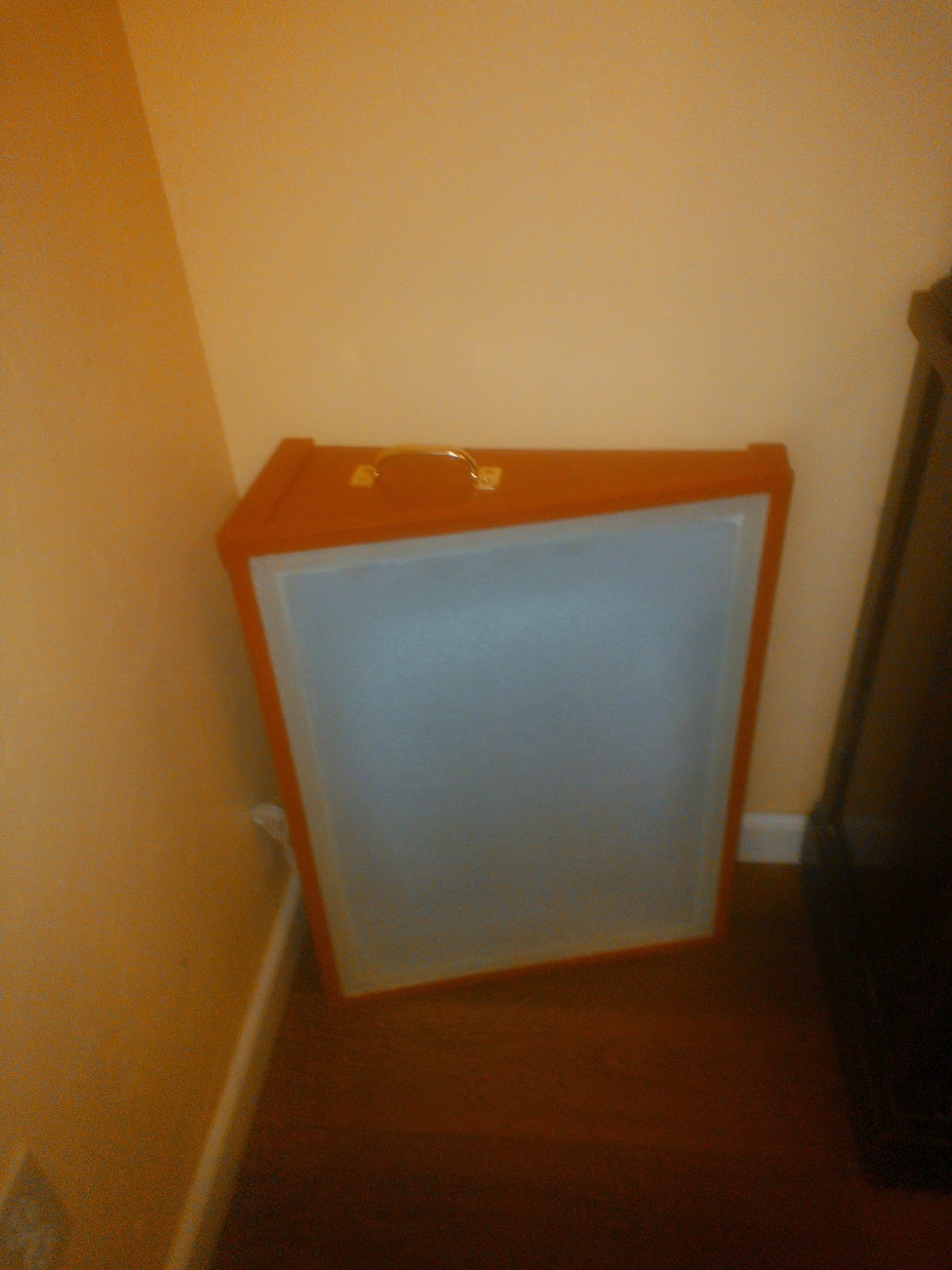 Forgive me if I'm being a terrible boast but Mr. Duffy went beyond what I had hoped and I had to show off his handiwork. A note about the color: Nearly twenty-five years ago in a conversation long forgotten by myself I told him about touring Carl Larsson's home. I was impressed by his use of light colors and especially of red. All these longs years Mr. Duffy had that tidbit of information stored away and dusted it off to make good use now. Without seeing the color himself he made a pretty good match I will call it my Carl Larsson light box.

I'll say nothing to Mr. Duffy about the charming desk in this Larsson picture because he might just build one.