Before I say anything about washi tape I must say that I already know that I am likely the last person in the Western Hemisphere to use it. Believe it or not I've never tried it. Much of the mail I receive is adorned with a strip of washi tape on the back. It often adorns the front too. Long have I admired the ease with which it can grace any envelope but not until now have I though that perhaps it might grace mine. I have long preferred sealing wax and probably always will.  Then on a whim the other day after spying rolls of washi at the craft store I bought a roll thinking it would work well with my new envelope template with the short, flat flap. Naturally, the pointed flap requires sealing wax but I'm on a different envelope kick at the moment. So here it is, Mrs. Duffy's first batch of outbound Washi Mail. I am pleased with its ease of use but miss the ritual of melting the wax stick and pressing the seal. In addition to cuteness and ease of use another washi perk will be not arguing with a certain postal clerk who requires all seals be hand-cancelled and charges me extra. A late comer on the band wagon, I am now a washi fan. 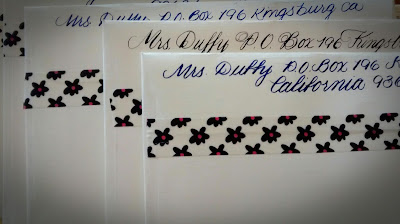