A very happy surprise awaited me at the Post Office today. I received a package from Anna with an invitation to tea in celebration of the Queen's 90th birthday.  And to think I could have had this a week ago if I had only gotten to the post office a few minutes earlier. There was a yellow notice in my box with nothing written on it. The window was closed so I could do nothing with it at the moment. Then I forgot about it until my weekly mail trip when there was another notice in my box. This time it was orange with a return date if the package were not claimed in time. Naturally I took it to the window and was given a red decorated package in return. The label told me there were tea goodies inside. I was delighted! Anna had written me that she was hostessing another tea party but I didn't suspect that I was being invited as I had participated in the Queen's Jubilee tea party. 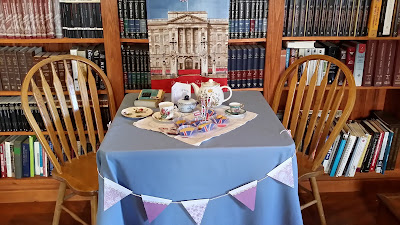 I set up a tea table in the library with two chairs; one for me and one for Anna. Not only did she gift me with a china tea cup but she included two tea towels and pennant flags as well as goodies. This gave me a chance to use the tea pot Mr. Duffy gave me for our second Christmas. I also used the tea set from the last party and drank tea from both cups. It all felt lavish and indulgent and I feel grateful to Anna for honoring me in this way. Everything was delicious! I've saved a couple of the sweets for dessert and I'll even share with Mr. Duffy. 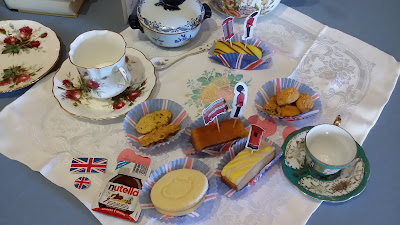 During tea I read the letters I received today and will spend the evening writing responses. What a good day; I feel warm inside. Thank you, Anna!! Yours is the first letter I'll write this evening!
Labels: Tea Party