I've developed the habit of answering all my mail before returning to the post office for more and as I visit my mail box weekly I must write regularly to keep up. I had whittled down the week's stack and the final piece of mail I responded to was a letter written inside this beautiful card. The picture is called "Grant Park" by Norm Plummer (2013). I had to look up Grant Park and found that it is 319 acres and proudly called Chicago's front yard. And what a yard it is; it's quite the happening place. 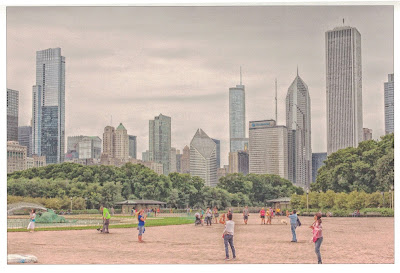 The park has been the site of many large civic events. In 1911, it hosted the major Chicago International Aviation Meet.  It was the scene of clashes between Chicago Police and demonstrators during the 1968 Democratic National Convention. Pope John Paul II celebrated an outdoor mass to a large crowd here in 1979. Championship celebrations for the Chicago Bulls were staged here during the 1990s. The park was the location for President Barack Obama's Election Day victory speech on the night of November 4, 2008.

On a different note my girlfriend, Susan recently visited England where she not only had a chance to listen to talks by N.T. Wright four times, but she also visited The Jane Austen Centre in Bath. 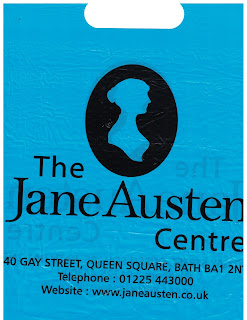 She kindly brought me a bookmark. It is made of hand-woven silk and decorated with freehand machine embroidery. The heart applique is early 19th century fabric. I love it!

Since I will not be visiting Bath anytime soon I took a virtual tour of The Jane Austen Centre. Until I get a chance to see it for myself I will be enjoying the bookmark and a good book. Books are the best way to travel, you know!
Labels: Jane Austen