Yesterday marked the 223rd anniversary of Marie Antoinette's beheading. Hours before her execution she wrote a letter to her sister-in-law, Madame Elizabeth. The English translation follows. As she faces death her main thought is for her children. She also entrusts herself to God, asks forgiveness of those she has vexed, and pardons the evils her enemies have done to her. Despite her notoriety she seems to have died well.

She also had nice handwriting. Her writing was probably even more regular and elegant when she was not distressed by impending death. 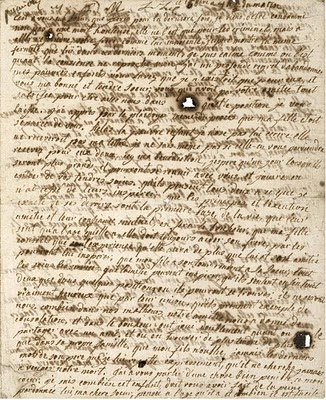 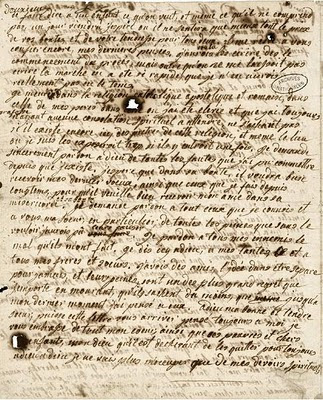 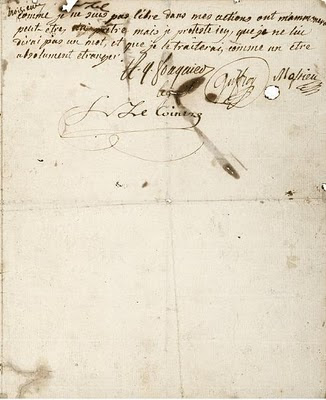 It is to you, my sister, that I write for the last time. I have just been condemned, not to a shameful death, for such is only for criminals, but to go and rejoin your brother. Innocent like him, I hope to show the same firmness in my last moments. I am calm, as one is when one’s conscience reproaches one with nothing.
I feel profound sorrow in leaving my poor children: you know that I only lived for them and for you, my good and tender sister. You who out of love have sacrificed everything to be with us, in what a position do I leave you! I have learned from the proceedings at my trial that my daughter was separated from you. Alas! poor child; I do not venture to write to her; she would not receive my letter.  I do not even know whether this will reach you. Do you receive my blessing for both of them. I hope that one day when they are older they may be able to rejoin you, and to enjoy to the full your tender care. Let them both think of the lesson which I have never ceased to impress upon them, that the principles and the exact performance of their duties are the chief foundation of life; and then mutual affection and confidence in one another will constitute its happiness. Let my daughter feel that at her age she ought always to aid her brother by the advice which her greater experience and her affection may inspire her to give him. And let my son in his turn render to his sister all the care and all the services which affection can inspire. Let them, in short, both feel that, in whatever positions they may be placed, they will never be truly happy but through their union. Let them follow our example. In our own misfortunes how much comfort has our affection for one another afforded us! And, in times of happiness, we have enjoyed that doubly from being able to share it with a friend; and where can one find friends more tender and more united than in one’s own family? Let my son never forget the last words of his father, which I repeat emphatically; let him never seek to avenge our deaths.
I die in the Catholic Apostolic and Roman religion, that of my fathers, that in which I was brought up, and which I have always professed. Having no spiritual consolation to look for, not even knowing whether there are still in this place any priests of that religion (and indeed the place where I am would expose them to too much danger if they were to enter it but once), I sincerely implore pardon of God for all the faults which I may have committed during my life. I trust that, in His goodness, He will mercifully accept my last prayers, as well as those which I have for a long time addressed to Him, to receive my soul into His mercy.I have to speak to you of one thing which is very painful to my heart, I know how much pain the child must have caused you. Forgive him, my dear sister; think of his age, and how easy it is to make a child say whatever one wishes, especially when he does not understand it. It will come to pass one day, I hope, that he will better feel the value of your kindness and of your tender affection for both of them. It remains to confide to you my last thoughts. I should have wished to write them at the beginning of my trial; but, besides that they did not leave me any means of writing, events have passed so rapidly that I really have not had time.
I beg pardon of all whom I know, and especially of you, my sister, for all the vexations which, without intending it, I may have caused you. I pardon all my enemies the evils that they have done me. I bid farewell to my aunts and to all my brothers and sisters. I had friends. The idea of being forever separated from them and from all their troubles is one of the greatest sorrows that I suffer in dying. Let them at least know that to my latest moment I thought of them.
Farewell, my good and tender sister. May this letter reach you. Think always of me; I embrace you with all my heart, as I do my poor dear children. My God, how heart-rending it is to leave them forever! Farewell! farewell! I must now occupy myself with my spiritual duties, as I am not free in my actions. Perhaps they will bring me a priest; but I here protest that I will not say a word to him, but that I will treat him as a total stranger.(*)
Labels: Historical Letters