Is it only my imagination or is there something anti-social about social media? When I visit Facebook I see mostly memes or videos made by somebody else that have been forwarded around the globe. During this election year debate season I hardly care to visit Twitter anymore as my news feed is filled with rants about the presidential campaign. Maybe by January it'll be safe to Twitter again.

My experience with letters is completely different, however. In a letter, the sender tells me something about him or herself or something directly related to them such as the injured pet that required veterinary care and the appalling bill that followed.  I learn about that person through direct information and through reading between the lines. In a letter, or series of letters, one can get a sense of a person's temperament over time, learn about what matters to them, find out what interests them, et cetera and I, in my turn, reveal myself to them.

In future, when I refer to social media, understand that I mean letter writing.

Another difference between anti-social media and social media is the interest factor. How many Facebook or Twitter posts do I actually read carefully...or revisit later? I confess I do a lot of skimming on-line. Social media is different. I do not skim letters. I read them carefully and often twice, especially if I do not respond immediately. Once I've written back the letter I received is placed lovingly in the top drawer of my desk where it will stay in easy reach should I need to consult it further along in the conversation.

And finally, will anti-social media ever inspire a great artist? I'll let you answer that.
Labels: Reasons to Write 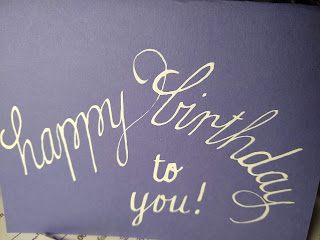 A Word on Birthday Cards