James K. Polk, the eleventh President of the United States (1845-1849) was born in November so as a happy birthday to Mr. Polk I have found a letter of his which I now share with you. Polk was president during the Mexican American war and even threatened the U.K. with war. More about Polk's correspondence can be found at The Polk Project where I happily found this letter.

"Polk is often considered the last strong pre–Civil War president, having met during his four years in office every major domestic and foreign policy goal set during his campaign and the transition to his administration."

He writes to George Bancroft, diplomat to England. You will find the transcript below the letters should you be interested in reading it. For myself, I wish I could write so well in a "hasty letter." 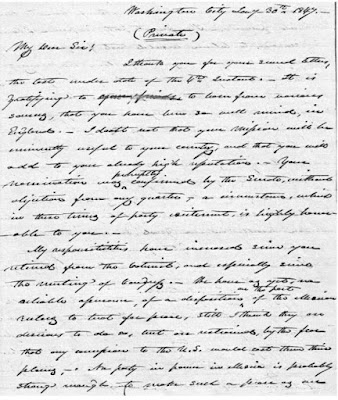 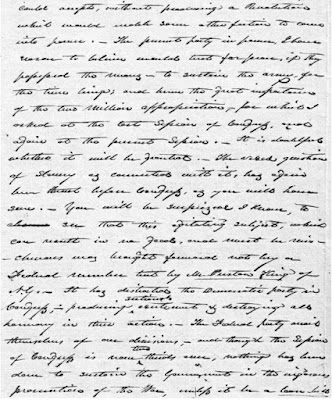 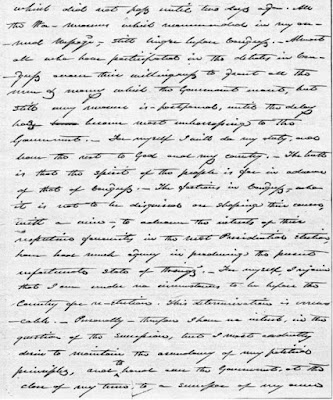 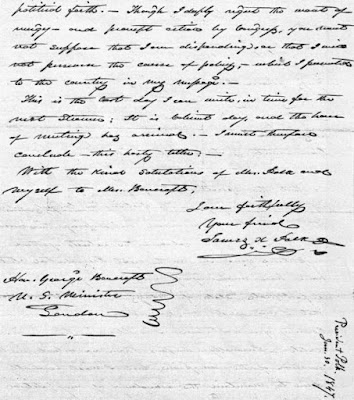 My Dear Sir: Washington City Jany. 30th 1847 I thank you for your several letters, the last under date of the 4th Instant. It is gratifying to your friends, to learn from various sources, that you have been so well received, in England. I doubt not that your mission will be eminently useful to your country, and that you will add to your already high reputation. Your nomination was promptly confirmed by the Senate, without objection from any quarter, a circumstance, which in these times of party excitement, is highly honorable to you. My responsibilities have increased since you retired from the Cabinet, and especially since the meeting of Congress. We have as yet, no reliable assurance, of a disposition on the part of the Mexican rulers to treat for peace, still I think they are desirous to do so, but are restrained, by the fear that any concession to the U.S. would cost them their places. No party in power in Mexico is probably strong enough to make such a peace as we could accept, without producing a Revolution which would enable some other faction to come into power. The present party in power, I have reason to believe would treat for peace, if they possessed the means—to sustain the army, for the time being; and hence the great importance of the two million appropriation, for which I asked at the last Session of Congress, and again at the present Session. It is doubtful whether it will be granted. The vexed question of Slavery as connected with it, has again been thrust before Congress, as you will have seen. You will be surprised I know, to see that this agitating subject, which can result in no good, and must be mischevous was brought forward not by a Federal member but by Mr Preston King of N.Y. It has distracted the Democratic party in Congress, producing sectional excitement & destroying all harmony in their action. The Federal party avail themselves of our divisions, and though the Session of Congress is now two thirds over, nothing has been done to sustain the Government in the vigorous prosecution of the War, unless it be a loan-bill which did not pass until two days ago. All the War measures which recommended in my annual message,8 still linger before Congress. Almost all who have participated in the debates in Congress avow their willingness to grant all the men & money which the Government want, but still every measure is postponed, until the delay has become most embarrassing to the Government. For myself I will do my duty, and leave the rest to God and my country. The truth is that the spirit of the people is far in advance of that of Congress. The factions in Congress, who it is not to be disguised are shaping their course, with a view, to advance the interests of their respective favourites in the next Presidential Election, have had much agency in producing the present unfortunate state of things. For myself, I rejoice that I am under no circumstances to be before the Country for re-election. This determination is irrevocable. Personally—therefore I have no interest, in the question of the succession, but I most ardently desire to maintain the ascendancy of my political principles, and to hand over the Government, at the close of my term, to a successor of my own political faith. Though I deeply regret the want of energy—and prompt action by Congress, you must not suppose that I am disponding, or that I will not persevere the course of policy, which I presented to the country in my message. This is the last day I can write, in time for the next Steamer: It is Cabinet day, and the hour of meeting has arrived. I must therefore conclude this hasty letter. With the kind salutations of Mrs. Polk and myself to Mrs. Bancroft. JAMES K. POLK
Labels: Historical Letters