Oh how I love Limner Mail. If you've been following Oh Write Me! you already know about Limner's love of Whose Foods Market bags. I am a happy recipient of an up-cycled bag. 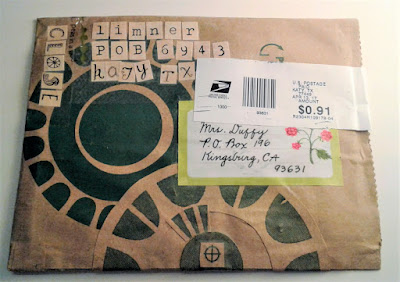 There's a goodie inside but I don't feel inclined to show and tell just now. Of course I had to write immediately and now that I have written a letter my day can have closure...

...but not until I have my supper. As I type Mr. Duffy slaves away in the kitchen making dinner. Have I mentioned he's an excellent cook? He's making large quantities of Maanchi Chicken. I've already introduced you to Maanchi, right? She's adorable.

Tomorrow is Cinco de Mayo which is a huge deal in my area. Mr. Duffy's office is having a potluck in celebration. He's bringing Maangi chicken because the's been telling the ladies in the office about this Korean cooking wonder and they've been asking him to bring crunchy chicken. When he was asked why he was bringing Korean chicken to a Mexican celebration he answered that this is America and we can do whatever we want. Food freedom is a wonderful thing. So is letter freedom so GO WRITE!
Labels: Letter Writing Limner Maangchi Up-Cycling