When my daughter was in an accident I was overwhelmed by the amount of support we received. The astonishing (and humbling) thing was that much of this support was from unexpected quarters. Three cards in particular stand as examples of this unexpected kindness. I've taken a very poor photo of two of them. Where the third one is I cannot say. That's what happens when you tidy up, you know. 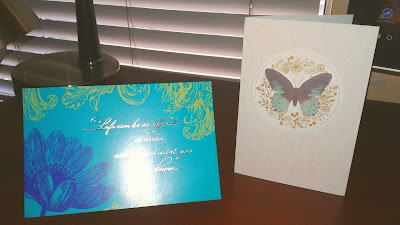 No doubt I will soon be reunited with it but it must miss the photo opportunity of the moment. Many cards have flooded in but the three in mention were addressed not to the injured party but to her mother. Mom needs support too. I realize through this that whatever the circumstance and whatever the relationship, no matter how remote, sending a card is always an appropriate thing to do. Which of us has ever complained about receiving an encouraging word in the mail or a card letting us know that someone out there is thinking of us. Unlike letters, cards expect no reply. They are freely sent without expectation of return. Most of us can probably list half a dozen people who would benefit from receiving a card. Why not be the person to send it to them? You will make a difference in someone's day.
Labels: Cards Kindness