Peace in the Mail

Remember the neglected January letter? It holds a simple design and a simple message: Peace; the thing we surely all long for. 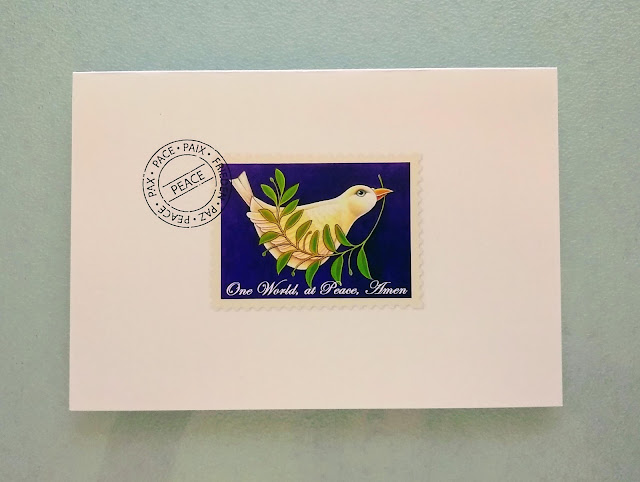 The olive branch as a symbol of peace originates in ancient Greece. There is a myth that Athena and Poseidon competed for possession of Athens. Poseidon thrust his trident into the acropolis causing a well of sea water to gush out but Athena planted an olive tree by the well. The gods judged that Athena gave the better gift and the city became hers. She was the goddess of wisdom, handcraft, and warfare.

The Roman poet, Virgil, used the olive branch as a symbol of peace in the Aeneid.
"High on the stern Aeneas his stand,
And held a branch of olive in his hand,
While thus he spoke: "The Phrygians' arms you see,
Expelled from Troy, provoked in Italy
By Latian foes, with war unjustly made;
At first affianced, and at last betrayed.
This message bear: The Trojans and their chief
Bring holy peace, and beg the king's relief."
The olive branch joins the dove in early Christian art. At Jesus's baptism the Holy Spirit descended on him in bodily form like a dove and Christians joined biblical and classical symbolism with the dove bearing an olive branch as an allegory of the Spirit bringing God's peace. Before the olive branch was a common symbol of peace the biblical narrative tells of Noah releasing a dove which returned to him bearing an olive branch. This was surely in the minds of those first Christians who used the dove and branch symbol to signify that in their baptism they received peace with God.
Labels: In the Mail