It may only be Thursday but due to a weekend excursion I visited the post office a day early. I've been on the go since and finally, hours later, have a chance to sit down and open letters. There is something about opening a letter...something of phycological benefit. It begins with the anticipation of going to the post office in hopes of finding letters. Then there's the turning of the key, the opening of the post box door and the peering inside hoping to catch a glimpse of envelope amidst the inevitable junk mail. Next comes sorting the letters from the circulars while happily recognizing names and handwriting and sometimes artistry before dropping unwanted mail in the bin and heading home, this time with increased anticipation. On arriving home I put on the kettle and choose a tea cup. Reading a letter is like tea with a friend. Then, settled in my reading chair I open letters and the conversation begins. Nothing else exists at that time and external demands are forgotten. I will then begin to write a letter in reply. That first letter may or may not be finished in one sitting. Returning to the other letters is more of a challenge but provides the same phycological space when I do. This evening is different simply because I was unable to maintain my ritual. Even so, the benefit remains. The first letter opened is a new conversation and really, the envelope was so stunning I couldn't resist opening it first. 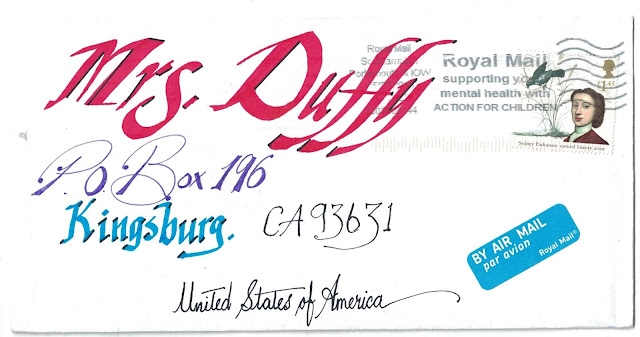 Not only is it stunning, it's postmarked Royal Mail. I ache to show you the content but I never do that. The letter is written in Spencerian Script and is intoxicatingly beautiful. You'll just have to use your imaginations on this one. I keep all letters and this one might get framed.

I will not have a chance to respond to letters for a few days but I know that when I do I can expect peace and felicity. I truly enjoy these epistolary friendships.
Labels: Handwriting Handwritten Letter In the Mail Mail Art