On a Saturday outing with the church ladies I happened across a quaint find in an antique shop. Aruthur's Household Library: Stories for Young Housekeepers was published in 1869. The young housekeeper of the day apparently had the leisure of time and money for reading and wholesome stories were thus provided by obliging publishers. 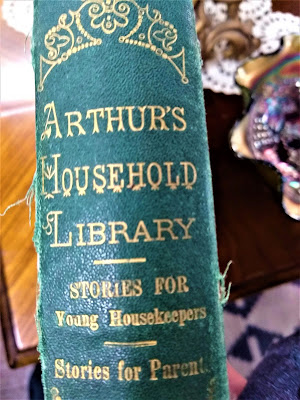 As enjoyable as the book was on its own merits, a greater prize lay within. Inside was a postcard cancelled in 1912. The postage was printed on the card and cost the sender a penny. Notice the address. This was in the day before zip codes. Out of curiosity I looked up 211 Maryland Ave. in Glendale and found that it is no longer residential.  I am not surprised as Southern California has changed vastly (as has everywhere else!) in the last 107 years 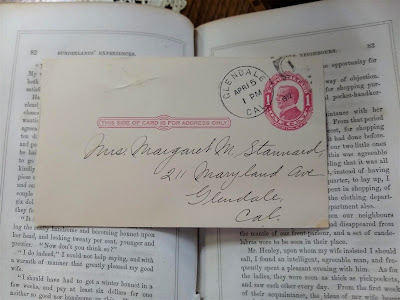 As you can see, the card was sent from a certain A. R. Taylor, Chairman of the Music Committee informing his choristers of their first rehearsal. Today such a message would be sent by email or text.  It would not then be used as a book mark, and it would not later be happened upon to be enjoyed and wondered about.  It would merely have returned to the nothingness from whence it came or else existed perpetually somewhere in the digital void. Putting pen to paper is a good thing. 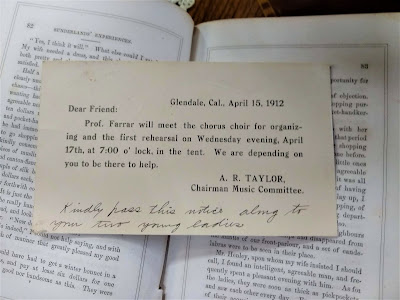 Let's not forget the coffee that launched the pleasantries. Kuppa Joy is known for their pretty offerings. Cappuccino has never looked so good. It was tasty too. 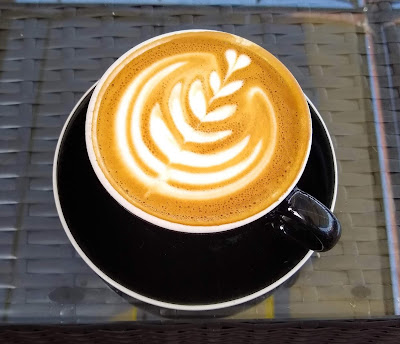 Such pleasantries are best read about in letters and I have enjoyed reading many such accounts from my pen friends over the years. What have you enjoyed lately? I would love to read about it!
Labels: Postal Matters Postcards