I must tell you about my new friend Mrs. Stewart. I was introduced to her at the Fountain Pen Network. Well, perhaps it was more of a reintroduction. Most of you are probably familiar with the laundry product, Mrs. Stewart's Concentrated Liquid Bluing, but you most likely do not know that it can be used as an ink.  An FPN member reports that she's used Mrs. Stewart's Ink for six years without a problem and I had to try it for myself. I loaded up a Pilot Ergo Grip and gave it a go on an index card. The flow was good so I did a one minute soak test. 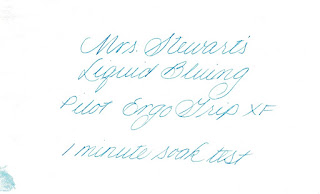 It stayed put! Now for the lightfastness test. I cut the card in half and taped one side to a window and put the other side in a drawer. A couple weeks should let me know if Mrs. Steward will be a faithful friend or if she'll just fade away eventually.

I couldn't help but load up a medium nib and see how she looked in a new dress. She really looks beautiful. 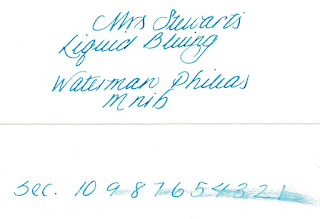 She has some shading and a dry time of about eleven seconds. The next day I had no startup issues. So far Mrs. Stewart is promising to be a bosom friend but, of course, time will tell.  At 8 ounces for $4 she is remarkably economical.
Labels: Ink Inky Adventure