Lately I have been practicing writing with the dip pen. Pointed pen can present special challenges. I have found that paper is one of the biggest if not the most important considerations. As you know, I've been sending out birthday cards this year and not being able to keep up production of my own cards I've been buying them by the box. The cards themselves are fine but the envelopes are of the worst possible quality and impossible to get good results with. I took a chance with an Amazon purchase of what promised to be a much better envelope and was very pleased. I am now cutting stationery to size and decided to write letters and practice the pen as a joint venture. What could be better practice than writing a letter?

Were there any hesitation or doubt about this plan it was erased by today's mail offering. I received another letter from the most beautiful hand I've met thus far.  I gained such pleasure from this object of beauty that I wanted to do the same for my pen friends. Hopefully in time the art will be perfected. I've decided to take pictures of my letters so I can track my progress. There's got to be some encouragement in that to keep pressing on toward the goal of perfection...or at least excellence. Yes, I'll aim at excellence and continual improvement.


A few weeks ago I went to a wedding and absent-mindedly left the card at home. I do things like that. I reasoned that receiving pleasant mail a week or so later might be just as nice as finding card along with a hundred others in a basket. I included a note of explanation and as it was not part of a conversation I will share it with you. I (really, really) like the color variation and hope that it will distract from any inconsistencies of lettering. 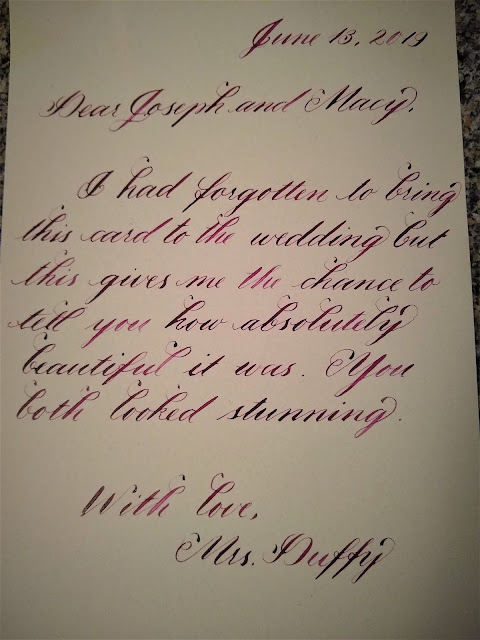 So friends, this is my latest epistolary venture. I hope you enjoy upcoming letters regardless of content.

Oh What Fun We Could Have!