Happy 4th, a Personal Note, and a Presidential Letter

As you might have noticed I have been away from blogging for a little while. I never intended to go on leave but life took some unexpected turns...well mainly one unexpected turn...our friend COVID came for an extended stay. Prior to this my posts had not been as regular as before mainly because I was working more. It's remarkable what one extra work day per week can do to and for a person. Then came along our said friend and when a co-worker decided to shelter in place and I agreed to take her days until this passed. And then it didn't. What initially was supposed to be a few weeks has turned into an indefinite situation and I have gone full time permanently. That was quite an adjustment for this homebody with the result that I have abandoned all but two hobbies, not including letter writing. (Would that be a hobby or more of something one does because they're human like brushing their teeth in the morning?) All this has resulted in Mrs. Duffy being forced into something resembling a self-disciplined routine in order to keep everything in balance. The final thing to come into order now that I've adapted to my new reality is a return to blogging.
As my thoughts turn to America's birthday clouds are on the horizon as civil unrest fills the news. These days I do little more than skim headlines as every articles seems designed to scare or intensify division. I'd rather just stay in my own little world. It's quiet and pleasant here. But back to the fourth. Over at the Library of Congress site I found a letter written by our first president, George Washington. Ever fascinated by the handwriting of historic persons I find his to be particularly pleasing. Below is a personal letter regarding a sermon and the death of a lady. It is marked not only by fine penmanship but also by great courtesy, something I find all the more admirable in learning that the new president was displeased with the recipient, a Reverend Joseph Buckminster of New Hampshire.
The following backstory is given at https://founders.archives.gov/documents/Washington/05-04-02-0234
Joseph Buckminster (1751–1812) was educated for the ministry at Yale, graduating in 1770 and then remaining at Yale for some years of additional study and as a tutor. In 1779 he became pastor of the North Church in Portsmouth. Buckminster delivered the sermon at a service attended by GW while he was in Portsmouth in November 1789 (Diaries, 5:488). The sermon was published as a Discourse, Delivered at Portsmouth New Hampshire, November 1st, 1789. On Occasion of the President of the United States Honoring that Capital with a Visit. By Joseph Buckminster, A.M. Pastor of the First Church in Portsmouth (Portsmouth, 1789). Buckminster’s sermon received mixed reviews, one New England clergyman commenting that “The text selected for the occasion was a passage from the twenty fourth Psalm: ‘Lift up your heads,’ &c. Some thought the selection a great mistake; and some even viewed it as a kind of idolatrous homage to the great man” (Daniel Dana to William B. Sprague, 22 June 1848, in Sprague, Annals of the American Pulpit, 2:118–19). An observer commented that he was informed the president was pleased with his visit to Portsmouth but “if any thing was disgusting to him it was what was said on Sunday, when he was at worship (but this is under the rose at present). Mr Buckminsters sermon or address will be published . . . you may Judge for your Self how far it was Deifying him—Considering he was present” (Jeremiah Libbey to Andrew Belknap, 6 Nov. 1789, MHi: Belknap Papers).
Would that we all gave such courtesy to those with whom we disagree. 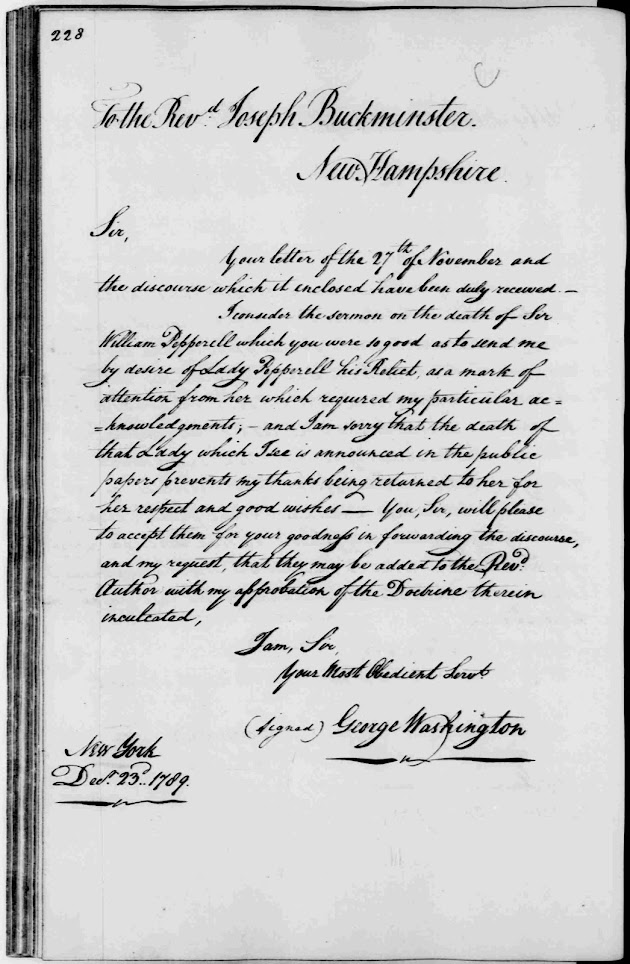