After collecting my mail late afternoon I entertained the ambition of writing a couple letters. Mr. Duffy would be coming home late providing me an opportunity for some writing. I needed tea for the job of course and heated the water but before the tea was made I was already losing steam. Because I woke before 4:00 a.m. I decided I would rather not risk compromising going to bed early so I instead settled for addressing envelopes in my armchair.

One postal offering was a postcard found by a pen friend in an antique shop. The photo is an interior of a restaurant called "A Bit of Sweden." 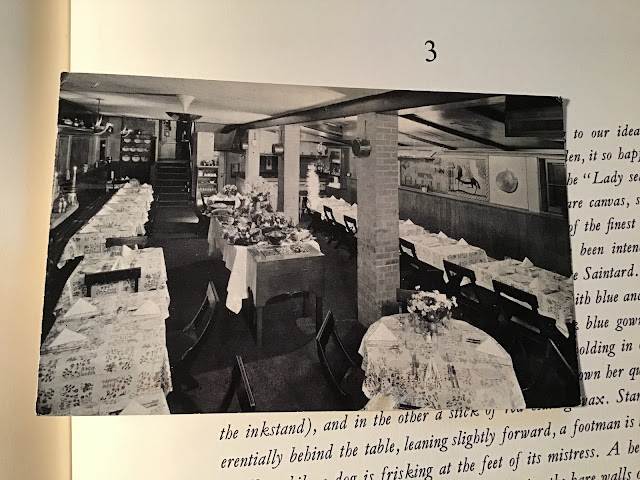 I am told this restaurant has since become a disco. Pity. For years and years Kingsburg had a wonderful Swedish restaurant called The Swedish Mill. If you look it up you can find pictures online. It was buffet style and it actually boasted a Swedish chef. There was even live organ music. Or was it piano? When I was a child my two musically gifted aunts (in-laws as such gifts had to be imported) played for guests. They would take requests and play whatever people wanted to hear so long as they themselves had heard the song before. No sheet music required.
I needed a writing surface and reached for the large one in my basket of books. To my surprise, I found a wonderful book gifted to me by a pen pal just three years ago. I had forgotten about it. The funny thing is, just a few days ago I was searching the internet for paintings on the subject of letter writing and here I had this terrific resource in my possession. It's called The Spirit of the Letter in Painting. I immediately opened it and who should I find but Vermeer. I adore Vermeer if you didn't already know. I look forward to renewing my friendship with this book. 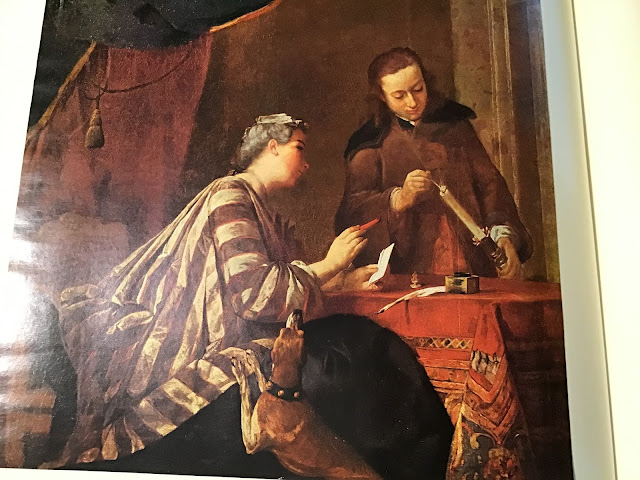 The postcard and the book remind me of the connections I have made through letter writing and the enrichment the experience has brought me. Taking the time to look up things people write about has taught me new things. One question I had after reading a letter today was, "So what does a cornflower really look like anyway?" "Was the color in my mind the same?" Yes, I remembered it rightly. I at first thought of Thomas Jefferson writing about gardening as my gardening friend had but that gave way to a childhood memory.

When I was a child my favorite crayon in the box was Cornflower Blue. Thank you Mrs. Thompson, for jogging my memory.